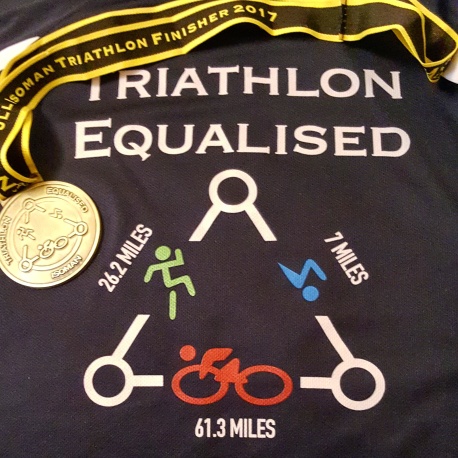 What is Isoman?
Iso was dreamt up in the pub by a bloke who kept beasting the Ironman swim only to be passed by his mates on the bike leg. This is a swimmers attempt at making the whole business fairer; equalising the disciplines. At the Manchester Tri Expo I watched people shaking their heads at Gary Jarvis, the race director, at his exhibition stand. This is a race that people are scared of.

Swim. I am a decent swimmer. I can swim a long way. 7 miles is a very long way. Last year I was disappointed with my swim time; (I sneaked in just 2 mins 30 under the cut off,) this return visit I wanted to better that.

My training had been spot on and I am a much better swimmer than 12 months ago; strength training had protected my shoulders from injury and I had no excuses. Except. I had doubts. My swim training never transfers to event. The week before the race I really began to worry.

My fears were justified. I bombed. By lap 2, I knew it was going to be touch and go that I could meet the 5 hrs 30 cut off and I had a little panic attack at the far side of the lake. Hyperventilating and being hauled in by a kayak after 37 minutes wasn’t in the plan though; I pulled myself together “calm and consistent” was the mantra as I carried on.

By lap 8 it was clear that I’d blown it. I only had 33 minutes to do the final lap, I’d been swimming much slower than that. I shrugged my shoulders at hubby, “what do I do?” he shrugged back, unable to help. Since no-one dragged me out with a boat hook, I decided to go back out. I  can swim the time I needed, so I went for the final push; I would go down with all guns blazing.

In mill pond flat water, I swam my hardest. I remembered not to trail my elbows, (which I do when tired,) I concentrated on ‘pushing my box’ to get a strong pull, I rotated, stretched, bi-lateral breathed and I kicked my legs like the clappers. I threw every last drop of energy at it. Despite everything, it was my slowest lap. Richard overheard the swim director talking to one of the safety kayakers “she’s got great technique and she’s kicking hard but doesn’t appear to be moving anywhere.” The water just felt thicker.

I reached the jetty exhausted but resigned. As a challenge in itself, a 7 mile swim is epic. I wouldn’t go home embarrassed and the tears would wait. Ok, I had a little paddy and threw my swim cap and ear plugs and I swore a bit; but I wasn’t horrible!

Then I was asked “do you want to carry on?” Baffled, I replied that I wasn’t allowed. Swim director, Mark replied, “hey, you’ve just swum 7 miles; I’m not going to stop you…”

T1. I didn’t want to carry on. My mind and body had accepted that I was done for the day. But, I was here to do Isoman and my race wasn’t over yet. “Get out on your bike before they change their mind,” I thought. Then, I realised there was another lady still in t1. I fairly threw my kit on and pelted out before she did…forgetting to apply sun cream.

Bike. The Isoman bike leg is basically just pedal and eat. I was utterly spent after the swim and knew I needed to fuel on my trusty cheese rolls. Trouble is that they were in my back pocket and the first wobbly 6 miles took me down a busy dual carriageway. I downed as much Tailwind as I could and just pedalled.

Things that happened on the bike leg…

I can’t be the only person who speaks to her bike. Ar Julie is a legend and compensated for my lacklustre cycling by having loads of gears and I used every single one to get up the merest pimples in the road. Badge of honour moment too when I managed my first mid-ride wee around the aptly named village of Little Widdle! With 20 miles to go, and in spectacularly un-aerodynamic fashion, I was comfortably back under the cut off and back on a roll.

T2. With over an hour to spare for the cut off I arrived back at transition. I’d made up time but I was definitely not fit to run a marathon. I was still exhausted and one of my knees was grumbling. I’m quite partial to a cuppa in t2 so teenage son was dispatched whilst I had a quick wipe down and change…

…no sign of my brew; just a sobbing adolescent who had spilt the lot and scalded himself in the rush. As hubby whisked him off to find cold water, I left the field worried and feeling like a terrible mother. (Adam was fine.)

Run. This is the bit that I’m good at! Just not today. Damn, this race wasn’t going to get any easier! It was 5:30pm and I’d been at full throttle since 7am. But, all I had to do was run 4 laps around the park. Let’s see if I can get this done for 10pm.

Ultra running has taught me to accept and adjust to aches and pains. 2 bad knees, a jarring lower back however, had me wrecked. There was a lot more walking than I would have liked. My brain was mashed and I fell over once because I didn’t pick my feet up. I couldn’t pass a portaloo without a visit and entering after a big ginger fella, clutching his stomach and with no water left for the flush, I discovered some people were having bigger difficulties than me.

You know it’s a long day when you find yourself celebrating that there’s only 19 miles to go; the next lap will take you under 15 miles, and that’s manageable.

1 lap to go. 6.5 miles. “Is the other lady still behind me?” I ask hubby as we catch up walking around the field again. She wasn’t far behind. She was 100m behind me…and she was still running.

This horrendous day was not going to end with me coming last. No bloody way!

It was dark as I headed back into the woods for the final lap. I ran every single step. I didn’t stop to fuel at the feed station. I just clutched my bottle of Tailwind and a caffeine gel that I was rationing for the final 3 miles. I couldn’t see the markings and had to trust that I knew the way. Haha, this was my final sprint and I was knocking out sub-11min miles!

I passed 3 fellas walking in tri suits, “OY, OY!” I shouted, “runner coming through; some of us are still going!” I thought that they were returning from the pub. It turns out they were still in the race too. (I felt a bit disrespectful when I later found out.)

With 2.5 miles to go a lovely marshal appeared alongside me on a bike with lights and a head torch. Riders had been dispatched to escort us all in safely. I’d been just about to throw it all in; the lady behind was welcome to beat me! I didn’t care anymore. I was done. But, my bike angel lifted my spirits. Just having someone to chat to and not having to think about where I was going anymore, (and the caffeine hit from my precious last SIS gel,) made the last few miles tolerable.

The End. So I finished. If you’d have told me last week that I would be an hour slower than last year, I wouldn’t have believed it and I may have cried. Instead, I’m super proud. I may not be the fastest at any of the disciplines, but, I will carry on till someone tells me to stop. At any point I would have stopped if someone had given me the option. No-one did. So, despite every message from my brain and body; I just carried on. I got my medal. I’m a double Isoman. (And the journey to get there has been immense!)

Final note. There are no pictures of me at the event because I was in such a bad way. Richard was too concerned about the state I was in to start snapping. Even the official photographers steered well clear. Perhaps this is the best indication that me and Iso are done…

7 thoughts on “Why be good at one sport when you can be average at three: Isoman 2017.”